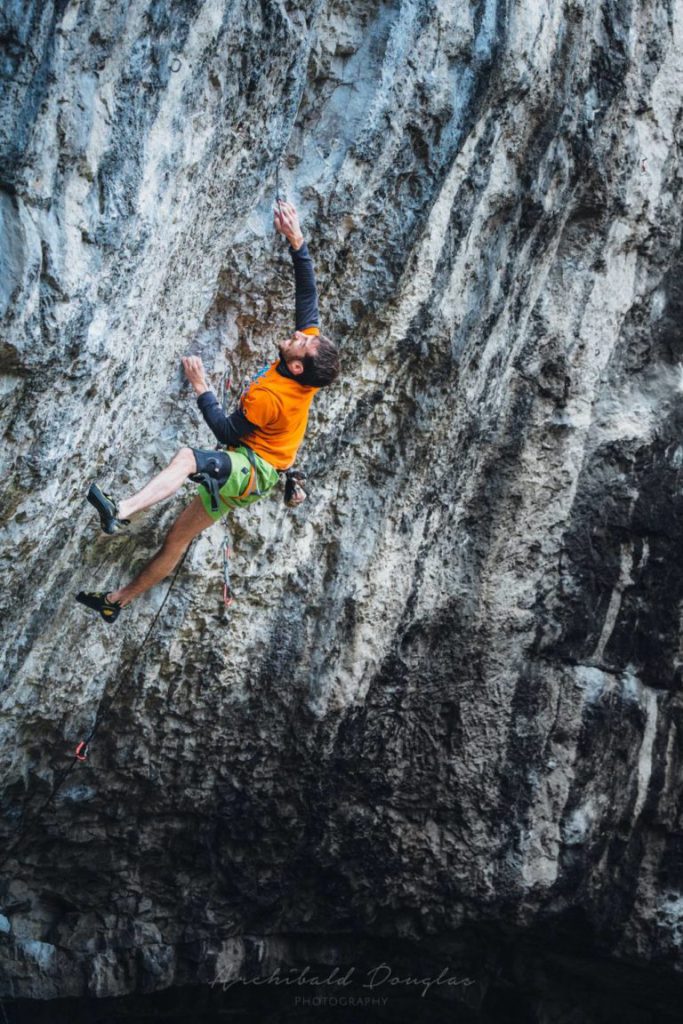 Andy Burgess started training with Lattice earlier this year as a boulderer. Andy recently climbed Mecca 8b+ just under 1 year after he sent his first sport 7b+. Andy has climbed up to 8a bouldering but not much else other than that 7b+ sport climbing before approaching Lattice for training. A remarkably quick progression, we thought we would ask Andy a few questions about the training and his journey from 7b+ to 8b+.

Hi Andy, thanks for coming here to meet me. Can we start by telling me a little bit about yourself, your climbing and your training?

I’ve been climbing for about 4 years and training for about 3 of those, mostly indoors. It would be nice to climb every day but I also have a job. Before Lattice, I would just train by myself 5 days a week and get really injured. But once I start doing my training plan, I haven’t been injured for about 6 months.

What sort of climbing did you do before Mecca?

Bouldering-wise I worked my way up to 8a sending a few at each level. But sport climbing I never saw it as I thing I wanted to do. I had only made my way up one 7b+ in Sicily around December last year, which I think was downgraded to 7a+. I didn’t know how to use a fucking clip stick. But I thought, who knows about hanging on for a long time and not coming off? Tom Randall.

Why did you have a goal of Mecca?

I was at Stanage Plantation one day and some old dude came up to me and said, ‘Hey you’re strong, you should try Mecca.’ I’d never thought about it before. So I went to the Tor and had a go and thought, shit, this was possible. Then, I saw a video of Mina Leslie-Wujastyk doing it and I was pretty inspired. The climb looked fucking awesome and I was just psyched.

What kind of training do you have to do to get up something like Mecca?

So basically when I started, on paper, I was already good enough to do it, technically, based on my finger strength. Apparently my finger-strength was good enough to do an 8c sport climb and my boulder strength was okay. But there was a lot to be done with aerobic and red-point tactics. Trying to translate bouldering-style to a sport climb, on paper, it might be right, but anyone can be really strong but it doesn’t mean you can climb a really hard route. Training is one thing and climbing rock is another.

What was the thing that made the biggest difference to get you from being a boulderer to a sport-climber?

Mastering the clip-stick and not tying into my leg loop! Seriously the biggest thing was relaxing and flowing through the moves. Aerobic power was one of the main things. I could pull for about a minute but after that I couldn’t at all. The training was to get really, really fit and then get the recruitment back as fast as possible.

You seem to be really driven and enjoy the training process. Is that right?

The reason for that is I have an addictive personality. And I’m addicted to training. It might sound stupid but being addicted to climbing is better than drinking or drugs. I get that same release from a hard training session as you do from drinking or smoking. I used to drink and smoke a lot but I don’t anymore. This is my outlet.

Can you describe the training process that got you to where you are today?

Basically it was like having a starter of aerobic, a main course of aerobic power and anaerobic capacity for desert, and that lead up to sending the route. That was the recipe for success, if you like, but I did find that coming up to the date my peak performance started, I couldn’t get into the groove anymore.

Every week where I got past the groove, I was doing 1 arm hangs and as soon as I stopped doing those in my training, I couldn’t get into the groove. I spoke to Tom and agreed we would add 1 arm hangs. I felt like I was super fit but I didn’t have the pure intensive power, but Tom said the 1 arm hangs would work to boost my mental confidence…

Okay so here’s the bit everyone wants to know – You had an amazingly structured approach to the red-point process. Can you tell us about it? You broke it into sections?

And that is the most important thing, because it’s really easy to get sucked into ‘Right I’ve done the crux’ and move on. From my perspective, this is the most beneficial thing you can do. You not only get strong but build your confidence up.

What training aspect was pivotal in the transition from bouldering to sport climbing?

Aerobic power and being strong on a single straight arm dead hang. I think the most important thing was having the mental capacity to try hard for 4 minutes instead of 1.

What would you say to anyone out there who wants to do Mecca?

Get on it. Try it now. Measure where you are and see how you feel and go from there. ‘All the moves are doable it’s just a case of putting them together.’

What are your next goals after this?

Keen Roof 8b by March. And then I want to do Ben’s Roof into Mecca in the autumn.

Thanks for answering all my questions Andy. Good luck with your new bouldering goals!

Alice Hafer is a writer & climber who also trains with Lattice. To read more of her work see her blog: Strength Follows.

How I Climbed My First 8a | Latticer Stories