The big grade of 9c has officially landed! Adam Ondra has succeeded on his Flatanger Project Hard, undoubtedly the pinnacle of his climbing career to date. The 9c grade is obviously a big number – almost too big for some of us to comprehend – but how big is it? What does this benchmark on the grading scale really mean?

We thought it might be interesting to look at whether Adam’s performance could potentially be matched by Alex Megos. To do this we’ve taken a few basic elements of physical performance and made some broad assumptions (yes this is a “fun” article and not super serious!) about what’s required to achieve 9c and whether… yes, the big one…. could Alex Megos actually go out and do 9c fairly quickly if he really wanted?

Lattice Training assessed Alex last year in 9b form and it was very interesting to look at his physical profile. The work that he has done with Dicki and Patrick over the years is superb and Alex’s attitude towards hard work stands out a mile. He’s got the special element of “try hard” that few athletes ever achieve and a physical profile to support it.

Ok, let’s look at the numbers!

Absolutely the number one starting point for any profile. How hard can the forearm muscle contract and how does that relate to body weight. We saw Alex achieving an almost superhuman 132% of body weight carried on our test edge and our best information on Adam is that he’s pulling 112% of body weight (although this was from a previous study a number of years back – Balas et al). I was talking to Adam in Spain this year (between redpoint attempts on a 9b!) and he still considers himself to have weak fingers compared to many elite climbers – I guess we have to trust that he’s objective! 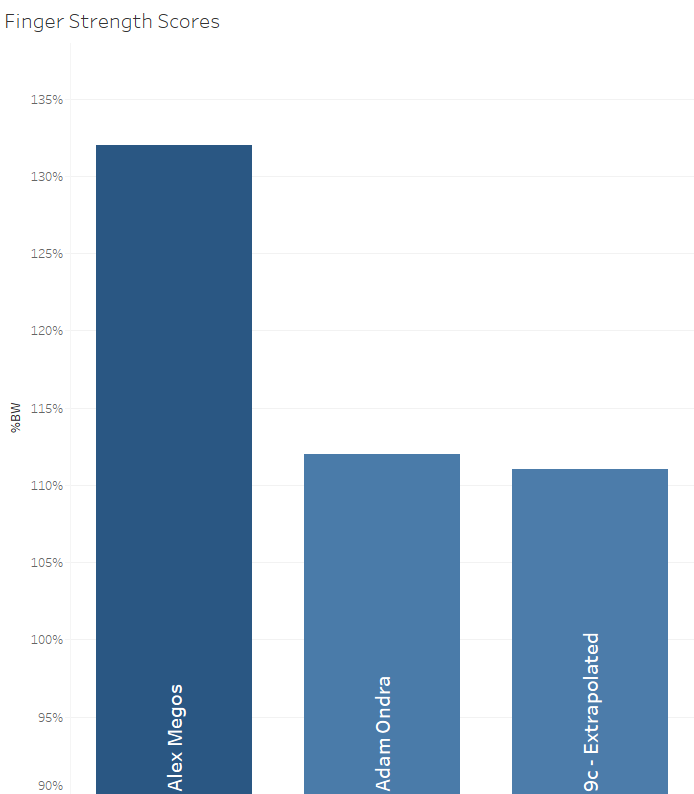 In terms of the data that we analyse, we would expect a 9c redpointer to be hanging a minimum of 111% of bodyweight on our standardized test edge. So theoretically both Adam and Alex hit the benchmark, but the latter is way above what we would expect. No surprise he does well in the Frankenjura!

The ability to produce high levels of lactate at a fast rate is critical for any athlete who demands performance in short windows (think crux sequences or long boulder problems). Typically we see those who favour short powerful routes scoring >30% on our scoring and those who perform well on long sport routes as having 20-25% score in anaerobic capacity.

As we saw in our testing, Alex had a predictably high AnCap of 35%. This is completely expected considering his love of bouldering and short limestone routes. If we were to test Adam, I’m fairly certain we would see AnCap scores closer to 25% which would mean you’d perform extremely well on long sport routes and as long as finger strength was adequate, it wouldn’t be a limiting factor on shorter routes either.

So here’s the real key. How does the aerobic efficiency of a muscle compliment with the anaerobic side? For those athletes who wish to get the most out of the finger strength they do have and also perform well on routes that take 4+ minutes, then it really is essential that the metabolism of aerobic energy is extremely high. If it’s not there, then it doesn’t matter how strong your fingers are (within reason!) you just won’t get up that 40m stamina-fest.

We know that Alex scored reasonably well on aerobic efficiency but was a significant margin away from the very highest scores. Having watched Adam’s performance over the years on multiple, long, hard onsights, recovery on rests and knowing Patxi’s approach then I think we can be very confident in saying his localized aerobic training has been entirely appropriate!

If I were to hazard a guess – and of course this is just based on experience and access to a nice big database of numbers – then I predict the following:

Finally…. Please remember this is a lighthearted look at Alex and Adam’s performance. We’re having some fun and hopefully providing you a look at what it requires to climb at these levels.