When to Leave a Project Behind | Interview with Oli Grounsell

Oli is one of the longest standing coaches at Lattice, and also happens to have been coached by us way back in his junior years – we’ve got a long history together! As a coach, he’s truly an expert in delivering all-round knowledge and experience, since he’s done so much over the years in many different styles. Calling Oli an “all-rounder” might be a bit of an understatement. Not only has he sport climbed 5.14+ and bouldered V13, he’s also been a GB Team member, trad climbed E9, and big wall climbed up to 5.13.

Oli has recently returned from a working trip to Spain (he’s never far away from a laptop working with clients!) which resulted in redpoints up to 8c+. Pretty impressive… But what we thought was more significant, was that he made the tough decision to walk away from a project that he had been specifically training for in his past training cycle; Estado Critico, 9a. We decided to sit Oli down and talk about how he decides to walk away from a project, and when something is worth pursuing to the bitter end.

How did Estado Critico become a goal of yours?

In Autumn 2018, I had a few days in Siurana where I decided to check out Estado Critico. On the crux section, I managed to find a good sequence but the last move was definitely proving difficult! I eventually found a way, and after practising it once or twice I felt like the route could be something to go back for. I have to confess though that I was only feeling 50% confident about that crux move.

What do you feel makes a route doable? How hard a sequence is too hard for a dedicated trip?

On most trips I’ve been on, I haven’t sought out long-term projects and have been aiming to climb routes in a handful of weeks. So firstly, it would obviously depend on the length of the route. Estado is about 40m and breaks down to a burly 8a to good rest, into a long V9 / 10 boulder, followed by an 8a+ upper wall. This translates to climbing at roughly my onsight level, to a boulder problem 1 or 2 grades below my max, to terrain I probably couldn’t onsight but would certainly be confident to climb second go. Given all that, the route felt doable if I could get the sequence right.

How did you specifically prepare for Estado Critico?

I started my year in China and then the UK had a great summer which allowed me to be outside climbing a lot. By winter 2018, I had a very nice base endurance level in place and the capacity to do lots of it! After my inspection of Estado, I knew that my boulder strength and aerobic power were going to be the limiting factors in a successful ascent.

How did you know what type of aerobic power training to do?

It’s always important to remember that whenever you think ‘aerobic power’, you should simply be thinking ‘refinement of base capacities’. Hence, it’s as simple as looking at the route you want to try and replicating that in your training! So, if you want to climb a 15m sequence at Raven Tor, you train short-end power endurance on edges on slightly overhanging terrain. If you want to climb a 50m cave in Rodellar, you make sure your training is of a long-end aerobic power, on better holds and much steeper terrain.

How do you decide you are strong enough for a route when training?

Generally, I don’t spend much time pursuing my bouldering limit, but would consider myself a V11/12 boulderer if I was to spend a bit of time doing so. With this in mind, and naturally being a route climber, I would consider most routes up to 9a to be realistic propositions in the not too distant future. This is because my level of bouldering provides the opportunity to be climbing crux sequences without operating at my max.

Cool, so you were well prepared then?! What happened when you returned to Siurana and your first day back on Estado? You must have been psyched!

Yeah, I was! I won’t lie though, even though I had been specifically training for Estado, part of me was also psyched by the idea of trying to get a few routes of 8c/+ (or 5.14) done. With this in mind, 2×30 (8c) and Patinoso (8c+) were tempting me! Vertical and long, they looked to be just my style…

When I got back on Estado, I felt good on the bottom and dogged all the way to the top, confirming my suspicions that the top was fine! However, I really wasn’t feeling good on the crux and it felt very “hit and miss”. From experience over the years, you can get a good gauge of what adaptions your body will make to a route as you invest more time in it. Here, it felt like in little time I could quite quickly get to the crux and fall. With more time it felt like fitness and efficiency would come quite quickly, but I would still just fall on the same move.

For me, the excitement of redpointing comes from inching up a route and the anticipation building as you get higher and higher, not falling off at the same place every time. So, I took the harsh decision and just listened to what my body and mind were saying and decided to try Patinoso instead.

Both you and I have talked through this same scenario with clients many times! Where do you feel is the line between pushing on and turning away?

On Estado, it was literally the case of that one move detracting from the redpoint experience. If it wasn’t for that move, I would have pushed on as the line is superb and the quality of climbing on the headwall amazing.  Furthermore, regardless of the ‘move’, I perhaps wasn’t as psyched for the route as I first thought. If I was truly inspired, I wouldn’t have been feeling that way.

In the end, I guess it came down to fun and I had the suspicion that pushing on wasn’t going to be that enjoyable! I need to have fun when pushing myself, otherwise it’s pointless and I’m not motivated to try that hard.

What internal conversation did you have after turning away from Estado? Did you feel bad?

No not at all, it was a very simple decision. I knew I could have more fun elsewhere so that’s exactly what I did. In the end, I would have questioned myself more if I’d pushed on with something I wasn’t totally inspired by, or having fun on.

So then, you went on to climb two 8c+s: Patinoso on El Pati and Radar Ez at Figols?

Yep, I turned my attention to Patinoso as well as 2×30 (8c). They both share the same start, splitting after about 15 metres, obviously with 2×30 having an easier headwall. They are both brilliant routes and 2×30 acted as a great fitness and confidence boost before climbing Patinoso a few weeks later, featuring a harder head wall and tenuous upper boulder with gastons and poor feet.

What did you learn from this experience and what may you suggest that your clients do?

Don’t get tunnel vision! If you are psyched for a route, there is a good chance you can also find routes in a similar area to be just as inspiring! Don’t be afraid to spend a few days having a play on different things and seeing what you get motivated by.

Do you see the same issue with clients and the general climbing population?

There’s definitely a mixture. Some are perhaps too focused on a specific route, while others may benefit from focused goals. You have to find a balance though, as with everything in life 😉

A good balance may be to take a “pyramid” approach to the grades that you’d like to try. I like to read info on our clients and see a willingness to just get out there and go climbing, as well as train and improve physically. This way, you create a great pyramid of routes and styles – basically you become a well-rounded climber. It’s nice to have lots of options and have the opportunity to simply enjoy more climbing! Then, when you find that project that really inspires you, you have this robust climbing background combined with a well-trained body — and everything just clicks… 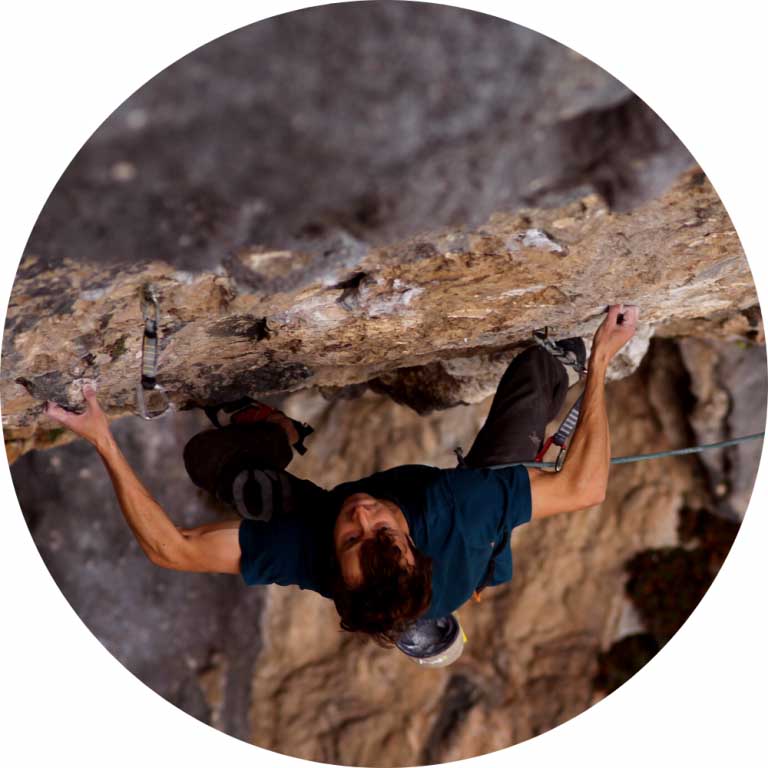 Training Tips for Climbers: Getting Used to Unusual and Varied Styles of Climbing